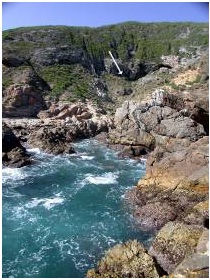 Blombos Cave is situated near Still Bay in the southern Cape, is some 100 m from the sea and 35 m above sea level. Professor Christopher Henshilwood from the University of Bergen, Norway and the University of the Witwatersrand, South Africa discovered the site in 1991. Initial excavations were by him and Cedric Poggenpoel and later with a team of excavators. Under Henshilwood’s direction the cave has been excavated from 1997 to 2009. Further excavations have already been carried out. The interior of the cave contains 55 sq. m of visible deposit with an estimated depth of between 4 and 5 m at the front and about 3 m toward the rear. When excavations at Blombos Cave commenced in 1992 the cave entrance was almost totally sealed by dune sand, also, about 20 cm of undisturbed aeolian sand overlay the surface of the Later Stone Age indicating no disturbance of the cave’s contents since the final Later Stone Age occupation about 290 years ago.