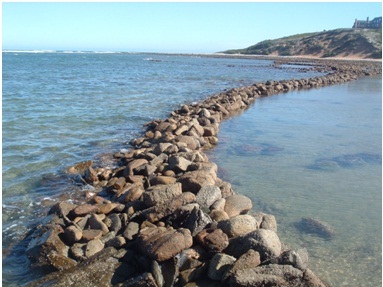 The stone built structures in the intertidal zone, at Noorkappers point (Skulpiesbaai), some 2 km from the Stilbaai harbour, represent a legacy of the early inhabitants of the southern Cape coast, who built and used the enclosures as tidal fish traps (now a National Monument). For many thousands of years these people lived on this coast, but the traps are probably not older than 2 – 3000 years, as sea levels before then were different to the present. When the first white colonists arrived in the late 1700’s and early 1800’s, the indigenous Khoekhoen were still working the fish traps, and the new settlers quickly adopted their ingenious techniques. Later operation of the fish traps required a permit from the local magistrate.
Until recently, Still Bay fishermen and farmers maintained the walls of the Noorkappers point tidal fish traps (23 in all) to preserve them against the destructive action of the waves. Each trap has its own folk name, such as Elmboog (Elbow) and Krom Knie (Crooked knee).
The declaration of this area as a Marine Protected Area in 2008, with the fish traps being included in the Restricted Zone, has brought the maintenance and use of this ancient technology to an end.
It is believed that it is of the utmost importance that a solution is found that will allow these fish traps at Noorkappers point to continue to be preserved as an example of the oldest working technology in Southern Africa.