Shell middens have been described as the rubbish dumps of Stone Age people. Such a rubbish dump, if excavated by a trained archaeologist, presents a record of the food people ate, the tools they made and used and the ornaments they wore.

Shell middens are easily distinguishable because, apart from a variety of shells, they contain the bones of animals and fish which were eaten by the Later Stone Age people. They may also contain some stone and bone tools. In more recent middens shards of pottery are found. Pottery was introduced by the Khoi about 2000 years ago. Shell middens are part of our cultural heritage and may in terms of the Natural Resources Act not be disturbed without prior permission from The South African Heritage Resources Agency. 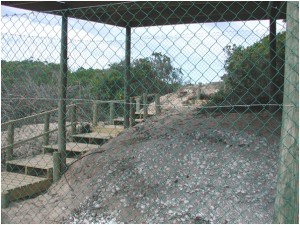 There are many shell middens to be found along the coast between the Gouritz river mouth and the Breede river mouth. One of these shell middens, above the harbour In Stilbaai, has been protected from the elements and human interference and, with the aid of steps and a viewing platform, made available for public viewing.